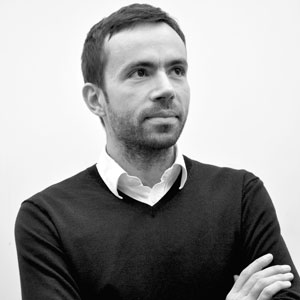 Born in 1981, an engineering graduate from the École Nationale des Ponts et Chaussées (2007) in France, the École Polytechnique (2003), and the Technical University of Civil Engineering of Bucharest, Romania, Razvan Ionica joined Marc Mimram in 2007 and became a partner in 2016.

Razvan is head of engineering at the agency and manages the structural design and direction of complex major projects, particularly in the field of infrastructure. These projects include many major constructions in China, such as the two bridges of Sino Singapore, the Yangzhou Footbridge, the Anyang Bridge or the Hainan Island Bridge; the Hassan II Bridge in Rabat, Morocco; or the new TGV train station in Montpellier. He is currently working on major infrastructure projects such as the Amédée Bridge that traverses the railway tracks in Bordeaux, the viaduct (600 m) extension of line 11 of the Parisian metro, and the Pleyel Saint Denis Urban Crossing.

Since 2017, he has developed research projects with the 03kN Agency that aim to introduce new techniques into the field of construction.

He participates in the agency’s transmission of knowledge through teaching missions (architecture schools of Marne la Vallée and La Villette), as well as conferences on the theme of infrastructure (London, Sao Paolo, Berlin, and Beijing).

Through his work with architects and engineers over the past twelve years, Razvan has developed a particular interpretation of infrastructure projects, which is reflected in the guiding principle of his projects, in perfect symbiosis with the agency’s DNA.